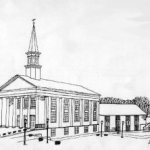 A Brief History of the First Congregational Church of Coventry

In the beginning- 1712- the First Ecclesiastical Society of Coventry was organized. Our first pastor, Reverend Joseph Meacham, served from 1712 to 1752. By 1715 the first church building was erected on the green facing Coventry Lake (Lake Wangumbaug) on High Street, across from Patriot’s Park. This building was originally 32 feet wide and 36 feet long, made of wood, and in 1736 it was enlarged to 32 x 50ft.

In 1736 the people in the northern section of Coventry, who had been having trouble traveling to South Coventry especially in the winter, were given permission to form the Second Congregational church. By 1744 they had built their own sanctuary.

In 1768 under the leadership of Reverend Joseph Huntington First Church erected a new church building next to the old school house. Ecclesiastical Society minutes say that it was 60 by 45 feet, that it had a balcony on three sides. There were 51 members of the church by the time Huntington died in 1794.

In 1804 the “Hale Donation” was formed when Mrs. Sarah Hale, in memory of, and at the request of, her husband, Major John Hale, made a gift to the church of one thousand pounds- worth about $4,000 in today’s money. This fund has continued to grow and income from it has aided young men and women from Coventry and the surrounding towns to train for the ministry. Major Hale’s religious books became the basis for the Hale Library and a source of information and inspiration for those students’ education.

While the Reverend Chauncey Booth was pastor of First Church (1815-1844) the church grew from eleven male members to 47 his second year, with 16 more added in his third year. By the end of his pastorate 292 people had joined the church with the membership in 1839 being 182. This growth was due mainly to the five revivals of 1816, 1823, 1828, 1831 and 1838. Growth also happened because of the Sabbath School founded at First Church in 1820. At least a quarter of its members were adults, and the studies were based on the Bible, the catechism and various commentaries and study books.

During and after Reverend Booth’s pastorate there were many discussions about the need to restore the church building; however, many of the younger members wanted the church to be located nearer the industrial center of Coventry. Differences in theological views also contributed to the departure of a group of people in 1849 when they formed the Village Church. In the same year the original church building was turned ¼ turn to face the green, and a bell was purchased. John Boynton donated land for the building of the Village Church on the present church site. In 1866, the tower of the original church was torn down, and the bell was sold to the First Church of Mansfield. Also in that year, the people of the First Church and the Village Church put aside their differences and united to be called the First Church of Coventry. The dove located over the clock in our balcony is the only relic from the 1768 church.

In 1894, the lakeside church building was offered to the town for $160, but the town declined. The building was destroyed by fire in 1897. In 1904, the spire of the present church was struck by lightning. It was rebuilt the same year, and the bell was recast with the following inscription molded into it: Proverbs 8:4 “UNTO, THEE A MAN, I CALL AND MY VOICE IS UNTO THE SONS OF MEN.”

In August of 1912, the First Congregational Church of Coventry celebrated its Bicentennial along with the town. Lectures, worship, music, a parade and fireworks were among a week’s special activities held at and near First and Second Churches.

In 1903 lightening destroyed the steeple and caused fire damage; thankfully, insurance paid for most of the cost of the repairs. In 1930, despite the Great Depression, the church raised $5,605 to redecorate the sanctuary. In September the Church was rededicated.

In 1937, an organ was purchased. Prior to that time various instruments such as a cello, a violin, and a flute were used to accompany the singing.

In 1939, the Reverend Dr. Henry Robinson wrote his doctoral thesis on the history of First Church, thus leaving us a wonderful resource for drawing inspiration from the actions of our ancestors in the faith.

The church and town’s 250th anniversary was celebrated in 1962 with a week of activities. Several copies of brochures, histories and at least three plates are available or on view at the church.

Church Lane ran from Main Street along the south side of the present meeting house. There were two houses behind the meeting house, the Kenyon property and the Lang property. The Church bought the Kenyon property in 1969 so as to obtain more parking space. Also in 1969, the steeple was again struck by lightning and badly damaged. The Kenyon house, then called the Church Lane House was used for church school and community services until it was torn down in 1985. In 1972, the church bought the Burnham property, and tore down the house on it.

In 1973, The Reverend Doctor Bruce J. Johnson was called by unanimous vote of the congregation and he served until 2010. His pastorate was characterized by growth of the church’s buildings, its membership and most importantly, by the growth of its people’s faith and ministries. He has also been actively involved in the wider community of Coventry and the surrounding towns.

In 1975, a committee was formed to put on dinners once per month, September to May. The tradition continues today, the general fund benefiting from the proceeds from the dinners.

From 1985 – 1987, a construction project was undertaken to build a new wing off the meeting house, called the Center for Christian Education. It houses the Sunday School, Social Hall, Church Offices, and provides space for the Coventry Early Childhood Center (CECC) Program. More information on them can be found at www.CoventryECC.org.

Rev. Dr. Sara Worcester was called as our Senior Minister in 2012 as were celebrating our tercentenary anniversary (300th). She resigned in 2016.